[Verse 1: Tupac Shakur]
Murderous mind state, can't keep my nine straight
Sippin' on this Hennessy, waitin' for the time to break
Show up and motherfuckers bow down recognize
Westside, Deathrow, Outlaw Ridahz
Untouchable mob of pistol packers
Well known felons, label for drug sellin' merciless jackers
Forever buzzed, roll with thugs and dawgs
Commence to lettin' off rounds, then escape in a fog
Who wanna see me solo? Catch Makaveli while he sleepin'
My mini fourteen murderin' niggaz while they creepin', uh
Duck or you ass out, drink till you pass out
Ain't scared to die, drunk drivin' in my glasshouse
Niggaz is under me, they bitches come to me
They heard the stories nigga now they wanna really see
Bomb first my motto, it's fully guaranteed
Niggaz is playa haters, label them my enemies, I'm dumpin'

[Verse 2: Hussein Fatal]
When it's on, I'm poppin' off every chance I get
Out the window on some uptown anthem shit
I'm stressin' but ain't no pressure here, I been there before
Fugitive, task force, at my girlfriend door
Now they checkin' our my bedroom, I ain't there
40 Cals, extended clips, still, I ain't scared
Outlaw, and best believe they won't take me alive
I'm different and I'ma prove it if it take me to die
Knew that God had a plan for me
But he won't be layin' up in my casket to doing life in the can for me
Maybe I'm breezy or paranoid than a bitch
Me dyin', you think I'd let them see the joy from that shit?
Walking dead, angel spend they last days by me
New Jersey giant like Dave Tyree
Young George and Jonathan Jatt, your guns clap
Mine'll go brraaatt, soldier like Geronimo Pratt
And come through cockin' the black pound
When they put twin towers up, Pac, I'm knocking them back down
Poster child cheque, Air Force Ones with the crooked dial checks
I'm supposed to wild sex
Money and murder, is all I breathe in my life
It's full of judges and chasin' enemies in the night
Through the Henny I see the eyes of the devil
G ridin' with extra boxes of bullets to the nine and the shell

[Verse 3: Papoose]
I always thought I'd have to die to do a record with Pac
So I wrote from the perspective of a graveyard box
You end up in a box cuz them graverobbin' bastards
Dig your grave back up, snatched you out the casket
Worms in my eyes, eating through my cabbage
The flesh to the bones, the bones to the ashes
But I'm not dead, I'm actually in a session
With the 'Pac keeping the shot money, progressive
They don't really want no drama, I know you're goons
That's why I keep pressure on them like a open wound
This God-given, he keep givin' me better music
So every time you hear me, my songs present improvement
Y'all can't kill me, y'all forever losin'
Songs are evolution, If I load your gun for you
And we bang it out at some other niggaz you better shoot it
Don't try to lie and say you was bustin', I'm clever stupid
Claimin' you reppin' Ruthless, you got the same bullets that you had
When I loaded it for you, you never used it
The Nacirema dream get ready for execution
Papoose, Fatal and Pac, the 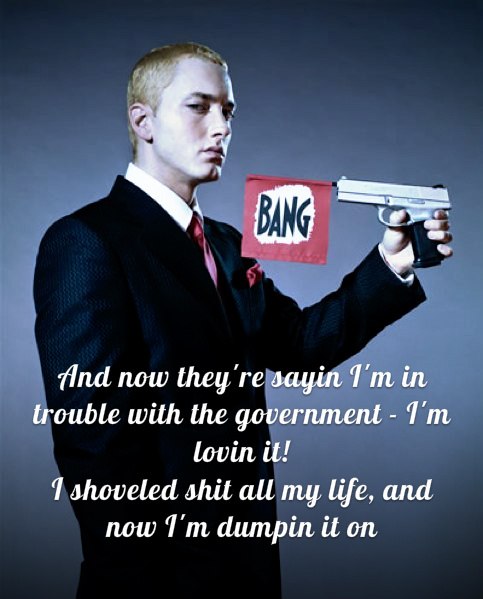